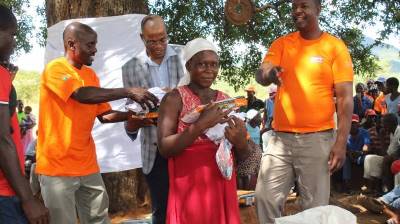 AT least 2 500 Cyclone Idai victims in Shinja area of Chimanimani have received 6,3 tonnes of garden vegetable seeds worth US$40 000 from Development Aid from People to People (DAPP)  Funded by the Danish Emergency Relief Fund (DERF), DAPP handed over the donation to ward six and nine beneficiaries, of which 63 percent of them were women.

Speaking on the sidelines of the handover ceremony, DAPP Zimbabwe country director, Mr Mathias Paradzai, said the donation was aimed at enhancing and improving food security, nutrition and incomes of the targeted households.

“There is room for the households’ livelihoods to improve through availing agricultural inputs. This will increase household disposable income and reduce expenditure on food products.

“DAPP, with the support of the Danish Emergency Relief Fund stands with the people of Zimbabwe and are trying to assist families in Chimanimani District to live healthier and more resilient lives.
“The successful handover we are celebrating today was made possible by the unity and hard work of men, women, youth and leaders in the district,” he said.

The beneficiaries were selected from 1 000 households that participated in the DAPP Zimbabwe’s DERF food hand-outs and non-food items distribution programme which was implemented from May to August 2019.

In an interview, DAPP programmes manager, Mr Petros Muzuva said distributing the seeds was an early action programme for the victims of the devastating disaster.

He said vulnerable children and people living with disabilities were not an exception as they benefited through the organisation’s Child Aid Programme.

“The idea is that farmers should grow vegetables and they gain on both ends as they get their nutrients from the vegetables they grow as well as income from selling the produce. We are working together with Government and other developmental partners to see that these people’s lives are revived.

“Ultimately, the action will contribute to the country’s food chain emergency by implementing best agronomic practices and techniques which have proven to be effective in building resilience ahead of climatic change effects,” he said.